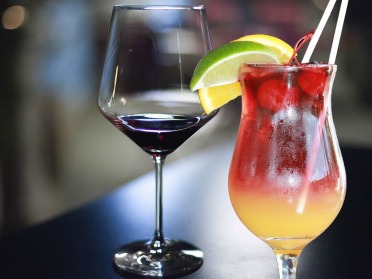 Alcohol In Pregnancy…Just Say No!

I had the privilege of meeting a pregnant woman the other day, IMAGINE THAT…..She was in her second trimester of pregnancy…..

On this particular occasion, the woman asks me, “Dr. Angela, do you think it would be ok if I had a drink?!?!?” My immediate response was, “A drink of what”? She then beckoned me over with her hand and whispered in my ear…….”I’ve been dying for a glass of red wine”!

I know that some of you are likely thinking, “alcohol in pregnancy, that’s a no brainer”. Well, not so much! Lots of folks seem to be under the impression that a sip here, or a glass of wine there, will have no impact on the unborn fetus.

WRONG! I DO NOT, under any circumstances, recommend that my pregnant moms KNOWINGLY consume alcohol. Regardless of what trimester they’re in!

The American Academy of Pediatrics recently released data implicating fetal alcohol exposure as the leading PREVENTABLE cause of  birth defects, and intellectual/neuro-developmental problems in children.

How much/little does it take to cause such issues? No one knows for sure; hence, it’s best to just avoid it all together.

IT’S PREVENTABLE! Just say no to alcohol during pregnancy.

It’s a COMBINATION of mental, physical, and behavioral problems…….you may note physical findings including but not limited to: small head, a smooth philtrum(the space between the nose and the upper lip), shorter height than expected, etc.

Structural and/or functional disorders with organ systems such as heart, kidneys, bones, and/or hearing/vision problems are common place.

The more you drink, the more likely you are to have an affected child!

20% of pregnant women consume alcohol…..where there is use of one substance, there is likely to be others.

Lets not be judgmental….this isn’t a socioeconomic “thing”. More folks than you might think have substance abuse/use problems.